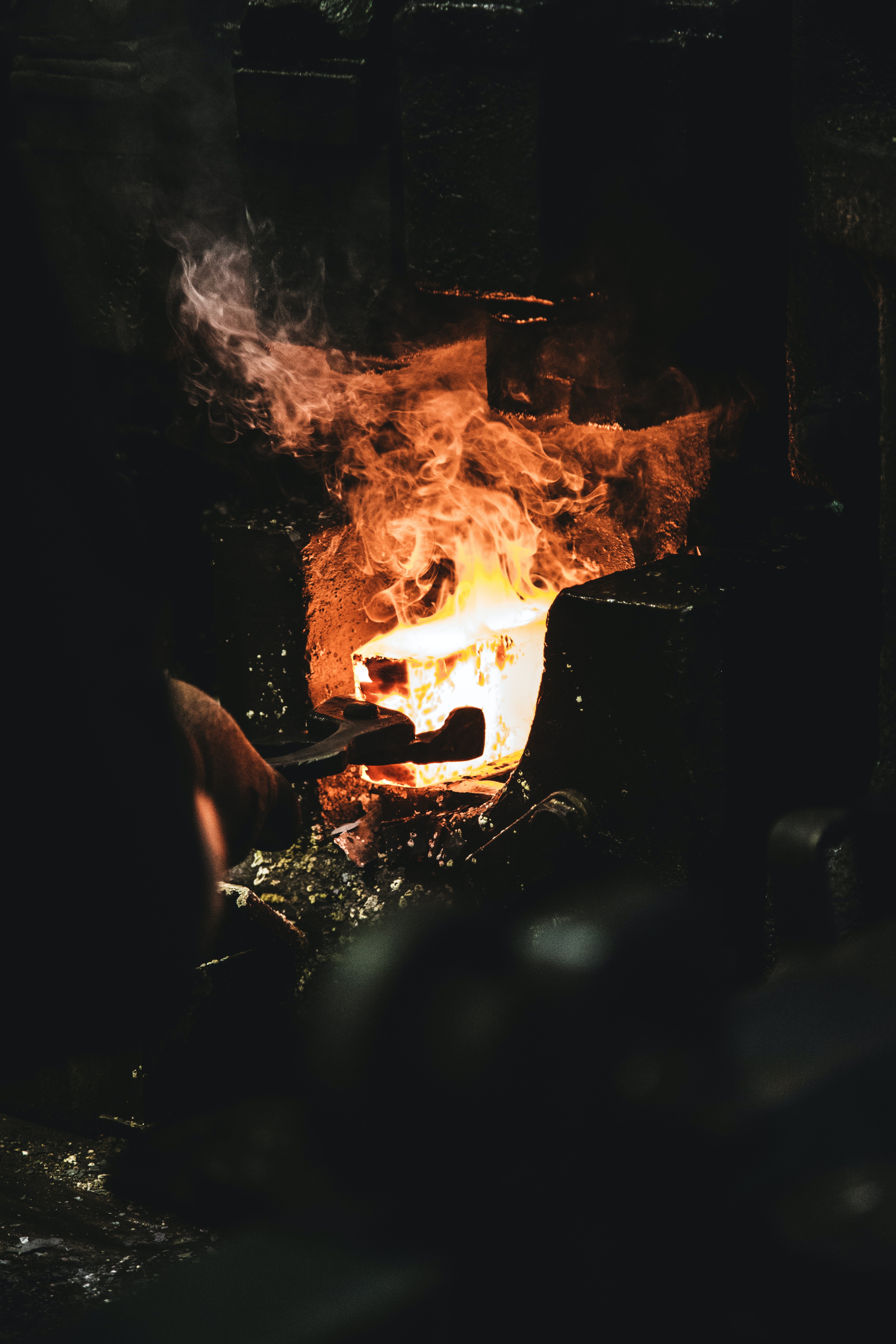 Model engineers will welcome this opportunity of building something entirely fresh. It is a handsome model, 10% in. high and 9 in. back to front. It weighs 9 lb. The diameter of the cylinder 1s 1 in. ; stroke 2 in.
Like our Beam Engine, it has the merit of needing quite a small boiler and quite a low steam pressure (10 lb. per sq. is ample). The No. 500 boiler 1s quite large enough.
With the very kind co-operation of the manufacturers, R. G. Ross & Son Ltd.. we have made a close copy of their modern hammer.
It is a straightforward model to build, well within the capabilities of a near-beginner who has a small lathe and simple tools. But it is not all lathe work-it calls for careful handwork with the file and will reward good workmanship.
For the model in its simplest form neither the shut-off valve (the steam cock on the boiler will suffice) nor the lubricator is essential. These are interesting refinements which may be added afterwards.
The shut-off valve, spring loaded, is made from the body casting of our wheel valve No. 152/3 whilst the lubricator is made from sheet brass and is provided with hand operated plunger-a copper pipe is in diameter leads oil through a non-retum vive to the cylinder.
When connecting to the boiler be careful that the steam Pipe slopes all the way down to the boiler as the steam hammer works intermittently and steam is sure to condense in the Pipe and should be able to trickle back into the boiler. Lag the Pipe full-size practice there is sensitive control of the stroke from the gentle tap to a full power forging blow, which is really dangerous - so be careful.

The Steam Hammer is unusual in that it is a machine capable of performing a job of work unlike the majority of Stuart's engine that produce work to drive another machine via direct drive or pulleys. In designing this hammer, Stuart has stuck pretty closely to the original Rigby's Patent Steam Hammer. The Soleplate has mounting holes for attaching to a base, mounting for the standard and a big hole. Just like the real thing the anvil is not mounted on the soleplate but is instead mounted directly to the floor and poking up through the hole in the soleplate. This means that the soleplate is not receiving any of the impact from the hammer which is instead directed through the anvil to the floor. The original anvil had a dovetailed slot used to mount a removable anvil block. SO when worn out it could be refaced or replaced. Wedges were used to hold the block in place. On the model this detail is implied, but is cast as one for simplicity. SOme intrepid builders have machined out the dovetail slot and engineered a replacable block for added authenticity. The Standard is hollow and curves up to the Cylinder mounting. Halfway up is mounted the control lever on the left side. The Rigby hammer has an extra bracket that appears to control movement of the control lever. This is ommited from the model but later examples have a small bracket over the control lever at the edge of the standard that limits lever movement range. On both hammers the lever movement is transferred to the centreline of the standard and connects to the bottom of the valve rod. A hole in the back of the standard allows for tightening a locking screw. An unusual feature of both is that the valve rod lever extends beyond the valve rod clevis and is curved. The reason for this is simple, as the hammer is retracted up the hammer block catches on the end of this lever and pushes it up moving the valve and slowing then stopping the upward travel. So if you lift the control lever rapidly for a fast lifting of the hammer it will catch and the lever will jerk in your hand. This goes for both hammers and is a nice feature if calibrated correctly it stops the piston crashing into the cylinder top plate. This is important as unlike a normal steam engine piston travel is not restricted by the crank. Downward travel is obviously restricted by hammering on the anvil. The cylinder is interesting as it has a separate mounted Gland housing for the Hammer piston rod. This is because the rod is not round in profile. It is round with flats machined into oposite sides left and right.

Its the real thing

The valve rod lever is exThe full size hammer has this gland cat in two halves to allow for easier machining with the piston rod profile, on the model the gland housing is machined with a round profile and the brass gland compression fitting has to be drilled and filed to match the hammer rod profile. A goodly amount of gland packing allows for a nice steam tight seal despite the long stroke of the hammer. With the gland casing mounted to the bottom of the cylinder, it can be mounted to the standard. The Valve chest mounts the hollow piston valve that is closely modelled on the original. One important difference from normal crank engines is that the valve allows for steam pressure to be connected to both top and bottom sides of the piston at the same time. This allows for the hammer to stop, under pressure at any point in its range. In this position the piston is balanced, slight movements in the valve can allow for very slow, controlled and low force movements. Further movement applies more speed, force and travel. Normal steam engine valves only allow steam to one end of the cylinder at a time. The Piston/ Hammer Rod is machined from a single piece of steel and includes the hammer, detailed to look like the full size hammer which also had a dovetailed hammer block. Both engines were fitted with a lever operated steam shut off valve, Stuarts being a modified globe valve, to look like the original. It is fitted with a long operating rod connected to a fitting on the side of the standard. Steam Hammers, unlike, steam engines often sit idle with the steam connected, their operation when working is irregular, this leads to a lot of condesation build up, The catalogue reccomends ensuring that the steam pipe slopes down to the boiler so any condesate there heads to the boiler. As the cylinder is mounted vertically with the valve at the tom, any condensate above the piston is naturally displaved when the piston is raised. Flushing condensate from below the piston requires it to be forved up the steam passages in the cylinder and through the piston valve, not very good. So Stuart cast the cylinder for a condensate valve to clear the bottom of the cylinder. It may be useful to crack the valve open a smidge so that it is leaking constantly steam or condensate. It is not uncommon for steam hammers to vent steam to the exhaust constantly due to the control design. One other fitting supplied by Stuart was a lubricating system. Due to the long periods of idle, condensate build up would empty a displacement lubricator fairly fast, so a pressurised hand pump system was designed. A small brass tank fitted to the bottom left side of the standard had a piston action hand operated pump mounted protruding from the back of the tank. This pumped small amounts of oil via a copper pipe to a fitting mounted directly to the valve casting on the opposite side of the hammer. This pumped oil under pressure to the top side of the piston valve where is would lubricate the valve and should work its way in to the top side of the cylinder. The Steam supply valve and the oiler are found on a minority of the Stuart Hammers I have come across. Thus adding to their value. Power is interesting, when operating a nice hefty thump is easy to achieve but how much force is available. With a 1 inch diameter cylinder, the piston surface has an area of 0.7854 Sq in. So for 30 psi we get 23.562 lbs of force and for 60 psi, 47.124 lbs of force. This is why the warning about keeping your fingers clear. Loads of force but at approx 80 lbs to crack open a walnut not so useful at christmas as you thought. For those of you dissapointed there may be one chink of light, one hammer I saw at an exhibition had a removable dovetailed anvil fitted, this was replaceable with a specialist anvil that presented a knife edge to the hammer, the concentration of force along that narrow edge may just be enough to crack the owners Xmas nuts of preference. What a great excu[se for a steam up over the holidays. (Hmmm tempting) Overall this model makes a nice change to the usual engines that you set running and watch and listen to the hypnotic rythm. This model requires operating, up, down, slowly, fast, hard, soft. Stuart has only produced two other 'non engines', the Boiler Feed Pump and the Oil Field Pump (aka nodding donkey). watch this space.

Befor I forget, you have to check out the video link in the sidebar to one of these steam hammers still operating in India as of 2008. Its amazing.

Here are two of the original Rigby hammers, the one above nicely labled with the maunufacturer's details cast into the standard, (Stuart cast his name in the same place on the model) The design of this one is slightly diferent to others I have seen with an integral standard and soleplate, still with the separate anvil. The hammer below is on display at Chatham Docks Museum and is clearly closer in design to the Stuart model. Whilst it is not obvious, these two hammers are of different scales the one above probably stands 10 feet tall whilst the one at chatham is more like 25 feet tall. Check out the tiled floor in the top picture and the size of the display board in the bottom picture for scale.